Fearless Enough is a spin-off novel from New York Times bestselling author Kelly Elliott’s Meet Me in Montana series. Readers will head back to Hamilton, Montana, for a family reunion like no other!

Blayze Shaw could sum up his life in one word, fulfilling. He grew up in the shadow of his famous father, Brock Shaw, a multi-year PBR champion, but chose not to follow in his dad's footsteps. Instead, choosing to work on the family’s cattle ranch in Hamilton, Montana. Everything in his life was exactly how he wanted it, and he was the happiest he'd ever been.

When a woman from his past resurfaces and is given the task of diving deep into his world for the answers he isn’t willing to share, Blayze’s perfect world is thrown into a tailspin. He wants to dislike her, but the more time they spend together bickering back and forth, the harder it is to fight his feelings.

Georgiana Crenshaw is chasing a career as a sports reporter and has something to prove to the top dogs at the network where she works. She hasn’t made it this far simply because of who her father is. Georgiana has succeeded solely due to hard work and determination. She dives in when given a chance to show she has what it takes to get the promotion she desperately wants. Told it will be the interview of a lifetime, Georgiana shows up at the airport with a go-get-'em attitude. Only when her father tells her who she'll be interviewing does she have a moment of doubt.

But honestly, how hard could it be to interview an arrogant, self-centered, obnoxious, too handsome for his own good flirt, who gave Georgiana her first kiss behind the barn on his father's ranch?

Fearless Enough will release on Apple Books, Barnes and Noble, and Kobo on March 19, 2023. It will then release on March 21, 2023 to Amazon and Kindle Unlimited and be removed from the other retailers. If you read on Apple, B&N, or Kobo it is best to preorder to ensure you have the book before it is pulled from retailers. 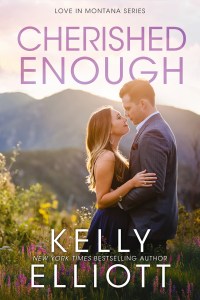 Morgan Shaw is my soulmate. She has no idea how much I desire her to fill the needs I crave. I've dedicated the last four years to learning everything I could about her. If my desire for her ever came to light before she realized how much she loved me, I would be labeled a stalker.

Some might find it a little creepy how I watch her every move. I find it exhilarating. I've even uprooted my entire life for her. Now this man has come into the picture and is not part of my plan. I see the girl's heads turn as he walks by, but Ryan Marshall has nothing on me and my love for Morgan. My obsession with her goes to my soul's deepest, darkest depths. If I can't have her, then no one else can.

It's almost time, Morgan, to be together forever.